As the body of Jesus lies wrapped in grave clothes in the tomb on this Saturday, we “praise and highly exalt” God for the earth and its creatures:

Glorify the Lord, O springs of water, seas, and streams, *
O whales and all that move in the waters.
All birds of the air, glorify the Lord, *
praise him and highly exalt him for ever.

Glorify the Lord, O beasts of the wild, *
and all you flocks and herds.
O men and women everywhere, glorify the Lord, *
praise him and highly exalt him for ever. (BCP 89)

As God incarnate, made man in the person of Jesus, occupies the last part of creation — death itself — we pray on this Holy Saturday that we, “putting away all earthly anxieties” (BCP 99), may be prepared for the service of God’s sanctuary.

From “the vast expanse of interstellar space, galaxies, suns, the planets in their courses, and this fragile earth, our island home” (BCP 370) to the microorganisms in the soil of the tomb, from the largest blue whale (“that Leviathan”) to the smallest child newly born, all creation is God’s sanctuary.

Every part of it has been made holy, not only by God’s creating it, but by God’s inhabiting it.

Even the darkest night, even the fear of death, even the silent cry of loneliness, all of the creation’s “bondage to decay” and all of our earthly anxieties have been redeemed, made holy by God’s inhabiting them.

The Song of the Redeemed  Magna et mirabilia
Revelation 15:3-4

O ruler of the universe, Lord God,
great deeds are they that you have done, *
surpassing human understanding.
Your ways are ways of righteousness and truth, *
O King of all the ages.

Who can fail to do you homage, Lord,
and sing the praises of your Name? *
for you only are the Holy One.
All nations will draw near and fall down before you, *
because your just and holy works have been revealed.

Glory to the Father, and to the Son, and to the Holy Spirit:
as it was in the beginning, is now, and will be for ever. Amen. 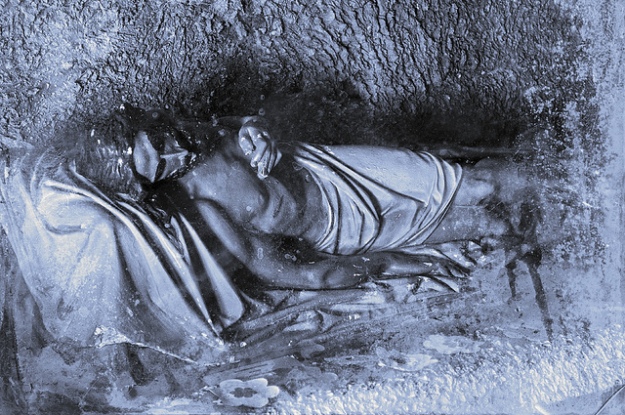 Christ in the Tomb. Image based on a sculpture found at the Shrine of Our Lady of Sorrows in Starkenburg, Missouri. Photo by Mark S. Abeln.

The cross has done its work. Jesus is dead.

His secret followers have laid him in a tomb. Jesus is dead.

Today there is nothing but prayer, Sabbath prayer to the God of creation.

Today “the whole creation waits with eager longing” (Rom. 8:19) to be set free from its bondage to decay.

Today there is only the tomb.