I’ve been reading Aldo Leopold’s classic of ecology and conservation A Sand County Almanac, and I just finished his biography A Fierce Green Fire by Marybeth Lorbiecki.

Aldo Leopold at “The Shack,” his family’s Sand County farm.

In one particular passage, she recounts Leopold’s struggles to sway public opinion during the Wisconsin “deer crisis” of 1942.

Leopold and other conservationists had become convinced that it was necessary to reverse the earlier practice of killing predators like wolves in order to “protect” species like deer.

In fact, what Leopold had come to understand is that ecosystems or animals and plants depend upon the balance offered by predators and fire and other “dangers” — otherwise, species without predators or plants untouched by periodic fires overpopulate and damage the ecosystem themselves.

Leopold outlined his approach in this way:

The public we are talking about consists of three groups. Group 1 is the largest; it is indifferent to conservation questions. Group 2 is the smallest; it thinks with its head, but is silent. Group 3 is of intermediate size, and does all of its thinking with mouth or pen. Perhaps a Conservation Commission would do better not to try to convert Group 3, but to convince Group 2 that there is a problem and that it should say or do something about it. Perhaps this would shorten the 23 years [it had taken that long to get an effective conservation policy passed.] (Lorbiecki 162)

So Leopold identified three groups of stakeholders: Group 1, the undecided; Group 2, supporters; and Group 3, the opposition.

From Sand County to County General

When I taught healthcare leaders as a member of the talent development faculty at the Advisory Board Company, we outlined an approach that included a stakeholder analysis just like Leopold’s and suggested three strategies to take for effective change leadership.

Copyright 2013 The Advisory Board Company

Just as Leopold outlined, the first strategy is to move Supporters (his Group 2) from vague action to specific action. Give your supporters a schedule inviting them to act now.

The second strategy is to move the Undecided (his Group 1) from inaction to action. Here, you must identify “what’s in it for me” — that is for each of them. Why should they join you? How will they benefit?

And the third strategy, somewhat counter-intuitively, is to move the dissenters from active reaction against the change (“with mouth or pen,” as Leopold describes his Group 3) to passive inaction. It’s best if your opponents just do nothing and let the change proceed.

So often, even if we have done a careful stakeholder analysis, we fall into the twin pitfalls of change leadership:

Preaching to the choir

As I know from being an Episcopal minister, the choir is already sitting up at the front of the church with us!

Talking to our supporters is easy, because they agree with us, but it doesn’t necessarily move our change forward.

In fact, our supporters may get tired of hearing us go on about the issue all the time, and we run the risk of alienating them.

When we know we’re right, we often spend a lot of time trying to convince others that they’re wrong.

However, Leopold came to see the wisdom of backing off from arguments lest his opponents’ charges of “Leopoldian egotism” prove true (Lorbiecki 163).

Effective change leadership consists not necessarily in convincing opponents of the change that you are right, but of negating their inclination to act against the change.

This calls for political savvy in addition to strong convictions.

A Change in Ethics

Sixty years on, we are still facing issues related to conservation; clearly, the changes Leopold identified as necessary take time to play out.

Even if change is effective, it is hard to sustain. It can be a challenge to teach new members of the group the hard-won wisdom gained in previous change efforts.

Lorbiecki asks, “How could such a revolution in cultural thought [Leopold’s “Land Ethic”] be accomplished?”

For Leopold, “Ethics are a kind of community-instinct-in-the-making.” He told his students: If the individual has a warm personal understanding of land, he will perceive of his own accord that it is something more than a breadbasket. He will see land as a community of which he is only a member, albeit now the dominant one. He will see the beauty, as well as the utility, of the whole, and know the two cannot be separated. We love (and make intelligent use of) what we have learned to understand. (Lorbiecki 174-5)

Whether you are leading change in a large organization or a small volunteer group, you are pursuing complementary purposes.

First, you must apply your leadership and political skill in the service of effectiveness — things must change, or you wouldn’t be leading the effort in the first place.

Second, you are also helping make or preserve a “community instinct.” You must apply your passion and understanding to the people around you, seeing not only their utility, but also their beauty.

People are part of any change, and the two cannot be separated.

To paraphrase Leopold, “we love (and make intelligent use of) the people we have learned to understand.”

Birds on a wire

It’s been a regular bird convention in our backyard today.

I just started reading Aldo Leopold’s book A Sand County Almanac, and one of the early chapters (July) makes me wonder what to expect this summer.

At 3:30 am, with as much dignity as I can muster of a July morning, I step from my cabin door bearing in either hand the emblems of my sovereignty, a coffee pot and notebook … I get out my watch, pour coffee, and lay notebook on knee. This is the cue for the proclamations to begin.

At 3:35 the nearest field sparrow avows, in a clear tenor chant, that he holds the jackpine copse north to the riverbank, and south to the old wagon track … the robin’s insistent caroling awakens the oriole … next the wren — the one who discovered the knot-hole in the eave of the cabin, explodes into song. Half a dozen other wrens give voice, and now all is bedlam. Grosbeaks, thrashers, yellow warblers, bluebirds, vireos, towhees, cardinals — all are at it … my ear can no longer filter out priorities. Besides, the pot is empty and the sun is about to rise.

My Nana was an avid birdwatcher, and my mother also feeds the birds so they congregate near her windows.

I’m much more familiar with the birds in the Zoology collection at the Field Museum in Chicago, where I worked for nearly a decade. I used to lead behind-the-scenes tours for donors, and the collections managers would simply leave specimens out for me to talk about if they couldn’t be there. 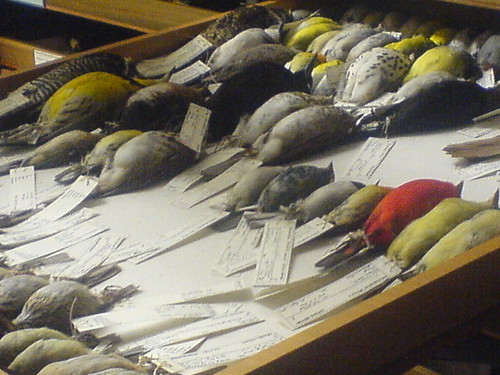 As fascinating a story as the birds in their mothballed drawers could tell, I’m coming late to realize that there’s a story coming down the wires live right now.